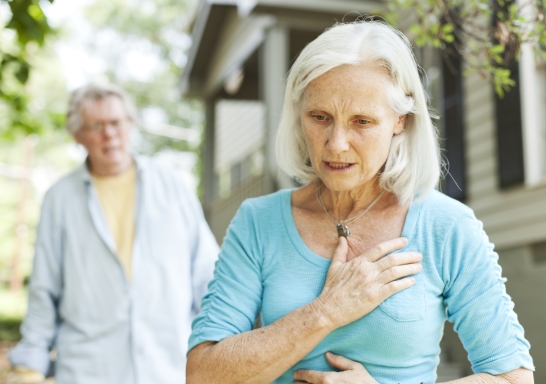 Having some leg discomfort or cramps after walking and exercising can be a common problem for folks as they age, but it can also be a sign of something that may be far more serious than getting on in years.

When you don’t receive enough blood flow to keep up with demand in your extremities, you’ll typically get symptoms such as discomfort or a cramping pain in your legs when walking uphill or up a staircase. This is known as claudication and can also suggest that blood and oxygen aren’t getting to your legs – and perhaps other parts of the body as well. This is a serious warning symptom because people who have it are also at increased risk for heart attack and stroke.

As you age, once supple arteries can become blocked through a process called atherosclerosis, sometimes called “hardening of the arteries.” Plaque (fatty deposits) can build up inside the walls of your arteries. As more plaque builds up, your arteries begin to narrow and stiffen. Eventually, that build up reduces blood flow to your legs. Around 18 million Americans, some in their early 40s, but many over age 60 have PAD. It comes with a 21 percent increased risk of a heart attack, stroke and hospitalization for a variety of complications.

Because the legs are the big warning sign, if we can save legs – we can save lives. The key to controlling this disease is to catch it and treat it early. That’s not been as easy a task for doctors as it may seem. Until now, doctors have had to wait for fairly significant symptoms of pain in feet, calves and hips to occur before insurance or Medicare would allow treatment.

At St. Mary’s Medical Center, we’ve recently put a new tool in the hands of our primary care physicians, in an effort to diagnose PAD much earlier, when more options are available for treatment. The screening device is similar to the oxygen sensor you may have had placed on your finger in a medical setting, but this clip makes use of a specific algorithm we devised to detect PAD symptoms before they become problematic – and it takes just five minutes.

Patients who complain of extremity pain are given a simple questionnaire by their primary care doctor. Those who qualify are screened by this method, which will help direct whether aggressive treatment is in order, or merely diet and exercise. Our hope is to maximize the identification of these patients and justify necessary treatment.

Some of these patients may need CT scans and if advanced, even vascular surgery. if not too far advanced, angiograms or laser treatments can be used to remove plaque. We’re also having good success with drug-emitting/eluding balloons. This balloon, coated with a drug to deter plaque buildup, has decreased the number of stents previously used in leg vessels. Traditional ballooning can injure a vessel and the chance of plaque returning is two-fold, which has been the reason for placing stents. But, because the stent is a foreign body, the body will try to shut it down. We now vaporize the buildup and then use the DEB to keep the plaque coming back, with the same, if not better results than stenting. Also, if you have a stent go bad, you’re looking at more vascular surgery. If an angioplasty goes bad, it can be reset. By doing this, we’re hoping to push the need for amputations way off – if not forever in many patients.

Is PAD avoidable? By quitting tobacco, exercising and eating a healthy diet, you’re doing a lot. Listen to your body, especially if you’re in the prime age range for PAD for signs of:

• Pain when at rest

We’ve been very impressed with our management’s encouragement in this team approach to a growing problem. It’s very special and not seen in many hospital settings.