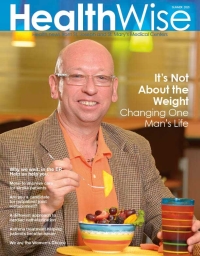 Deb Ohnoutka said having to give a few remarks was unexpected.

But she took to the microphone and walked through one of the key turning points in the recent history of Blue Springs.

Less than five years ago, St. Mary’s Medical Center was up for sale, and the community was apprehensive. A sale to HCA Midwest was announced but eventually fell through. More apprehension, more questions, she acknowledged. Would the hospital close? Or become a nursing home?

But the hospital got a new owner in February 2015, Prime Healthcare, and Ohnoutka was soon named chief executive officer. What’s followed, she said, is a period of stability, a shift in the hospital’s culture and a return to profitability.

“And we are so proud to say we are here, and we’re getting bigger and better every day,” she said. “And we could not do that without the support of Blue Springs.”

That progress was recognized Friday night with the Blue Springs Chamber of Commerce annual award for business of the year.

• The chamber’s membership is at 447, and its 2016 chair, Mark Whitlow, said ” …; I’ve never seen the Blue Springs chamber this vibrant, this robust.”

• The Citizen of the Year is Ted Meyer. He and Betty Meyer celebrated the 50th anniversary of their business, Meyer Music, last year. Ted Meyer was deeply active with the chamber in its early years and on Friday pointed out that as its president he presented the first citizen of the year award in 1969 to Dale Baumgardener. He’s also long been involved with Rotary.

The Blue Springs Rotary and the Blue Springs Education Foundation nominated him. The foundation wrote, “He has a selfless heart as he assists with music programs and supports, staff and schools. …; Ted’s impact is immeasurable.”

He noted that Betty, their daughter and now a granddaughter all taught or have taught in the Blue Springs School District.

“So we love Blue Springs,” he said. “We are so connected to it. We are so glad we landed here.